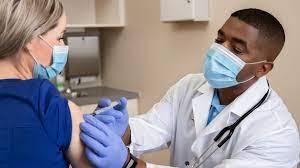 Healthcare staff at the Veterans Health Administration facilities must get COVID-19 vaccines, the Department of Veterans Affairs (VA) announced Monday, making it the first federal agency to mandate shots among its workers.

Four VA employees have died of COVID-19 in recent weeks! All four were unvaccinated and at least three of those deaths were related to the “increasingly prevalent Delta variant.” The VA also cited an outbreak among unvaccinated employees and trainees at a VA Law Enforcement Training Center — the third of its kind during the pandemic — as another reason for the vaccination mandate for personnel.

Starting on July 28, Title 38 VA healthcare personnel will have 8 weeks to get their shot, according to the release. Non-compliant employees could face penalties including possible removal from their facilities, according to the New York Times.

In relaying its decision, the VA pointed to support for vaccine mandates from multiple major medical societies, including the American Medical Association and American Nurses Association, as well as from hospital groups such as the American Hospital Association.